Brussels is a good example of a cultural and linguistic melting pot. As you take a stroll around the city centre, you come across half a dozen different languages, every 10 metres. In fact, most of its waiters and hotel staff are polyglots as they speak 4 or 5 languages, including some of the local people. This made my 3 languages English, Spanish and French seem less impressive. At the same time however, it has also strengthened my resolve to continue improving my language skills.

The city itself has some of the most beautiful architecture in Europe yet on a human scale. What I mean to say, is that it has intricate, opulent façades but it is not overwhelmingly opulent as most of the buildings are not very tall, thus making the city look rich in art and culture but in a cute, manageable way.

Brussels is a wonderful city for wining & dining. My friend and I ate Greek, Italian, Vietnamese, Belgium and Thai cuisine throughout our stay. Needless to say we had waffles for breakfast. Prices vary depending on your budget; we found places where you could have lunch with a drink for around 10 to 15 euros each, in addition to more upscale restaurants where as you can imagine “the sky is the limit”. However, be careful with some of the “hard sell” restaurants, down the narrow side streets and alleys where waiters jump out at you pushing their menus, as the food quality tends to be worse; after all, good quality sells itself.

Another thing I liked about Brussels is that their main monument was tiny. “Manneken Pis” is just a 65.5 cm bronze statue of a baby urinating. All too often, countries and cities try to outdo each other by having the biggest monument or skyscraper possible to draw in tourists; as in America with their “the bigger, the better” mentality, whereas Brussels seems to adapt a philosophy of less is more. There is also an obvious comedic value to their monument as it depicts a basic, bodily function we can all relate to.

So if you also fancy discussing your summer holidays with us …… then I hope to see you soon in class. 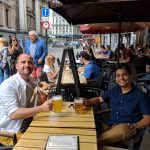